Your Past Life’s Pain Can Make You Cry Now!

Your Past Life’s Pain Can Make You Cry Now!

It was an afternoon of summers. Vikas came to me for his past life regression just to experience it and to know “Does a past life exist, really???”. That was the beginning time of my research and he was my first client. I tried my best ponder all my energy and knowledge with great concentration to hypnotize him. He went into a deep hypnotic trance state within twelve to fifteen minutes. “Look at your feet, try to look and recognize where are you? Can you see someone or yourself” I inquired according to the process. He was silent. I waited for his response. I could see his face expressions, he was being anxious as if feeling uncomfortable. I thought I was not able to regress him because that was my first attempt. Silence was broken “Its a road..an old times road as if in Europe or England…but…but I am not able to go forward”. He explained later that he saw a road the moment he entered into his past life. He wanted to go his home but he couldn’t. Instantly he felt as if the bed, he was lying on at the time of regression, started revolving very fast like a fan and his head started spinning like a wheel. That’s why he was unable to speak for some moments after entering into his past life.

“Go to your home Vikas” I instructed. “I can’t..” he was still anxious. I understood that there might be some extremely painful memory and his conscious mind was not allowing him to see that incident again. It happens, your subconscious mind keeps on storing your each and every memory whether it was in past life(s) or in current life but when we awake your subconscious mind through hypnotherapy, your painful or traumatic memories aggravate and your conscious mind doesn’t allow you to watch them again. Why? My experience says your soul doesn’t want to go through that trauma again but you should go through it. It makes you stronger and most importantly it diminishes the affect of that trauma still prevailing in your life and affecting you badly. In this way your soul (or we call subconscious mind in psychological language) grows to see the world in a different way and to tackle the problems, big or small, in a matured manner. 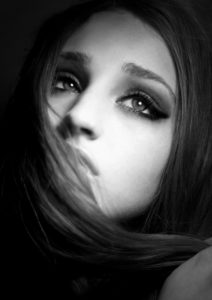 He was very strong and determined. He prepared himself to go and see what happened in his house in his past life. “I’ll count backward from five to one. The moment I count one, you will enter into your home. Five..go to your home..four..I know you can..three, two..you are almost going to enter into your home..one, be there! what do you see? how is you home? who all are there?” I helped him to regain his confidence. “Its a wooden house. I’m sitting on my bed. My daughter is lying on my lap. She is not well. She has a high fever.” His heart was filled with pain. “Haven’t you called up a doctor?” I asked. “Yes, I did but its raining badly. He hasn’t come yet. My daughter is dying” a drop of tear was falling from the corner of his left eye. “What happened next? Were you able to save your daughter?” I was trying to move him further. “No! she is dead. She is just 3 years old…so small…so adorable..how could she die!” his pain and grief was inexpiable. More tears started falling from his eyes. “Who else is there?” I tried to take him out of that grief. “My wife” he grabbed his strength. “Come out of that moment. That event is over. You lost your daughter so early whom you loved so much. She will definitely come back in your current life or in your future life.” I then took him to his that life’s one more important event. His wife left him because she thought he was responsible for their daughter’s death. She went to her mother. She never came back. “Had you ever tried to make her understand that that was not your fault?” when I asked he said “No”. I advised him to go and make his wife understand the situation. It was not his mistake. He loved his daughter so much. He was equally in the trauma of losing his daughter as she was. He was all alone and crying. His tears were unstoppable here in front of me also. Al last, he again determined to go and talk to his wife. He went to her. “I hug her tightly. I am so alone. I need you Paris. My life is incomplete without you. There is nothing…I’m nothing…without you..please come back” His wife’s name was Paris in that lifetime.  “Do you know her in your current life?” when I inquired he instantly replied “Oh! Yes, she is Poonam” Poonam was his girlfriend in his current life. He lived a completely painful and lonely life. He was seemed to be pooped up there on the bed also. I decided to take him back in his current life.

Later he told me he felt so relaxed and light after meeting his wife. He hadn’t met her after she left him in his that life but after doing that he was feeling so satisfied and assured because he knew that his wife had met him again in this life. He understood that she was same her soul was  same, only bodies changed. He told me that he is medically fit but he always had a fear in his current life that he would not be able to have a child and if he had he would lost that child and he always wanted a girl child. He was not married but that was his feeling that he shared with me. Same thing he felt about his girlfriend. He understood that that was all his past life’s connection with his girlfriend and with his daughter. Both left him  and he was all alone.

This Blog is for informational and educational purposes only. The information provided is not intended to be a substitute for professional psychiatric treatment. Visiting this blog this does not create a therapeutic relationship with Nitu Dhiman or imply that one has been established with him. In no event shall Nitu Dhiman be held responsible for any negative consequence to the reader resulting from the reader’s use of this material.
Whilst every effort will be made to keep the information up to date and correct, there are no warranties, either expressed or implied, that guarantee the accuracy, reliability, accessibility or suitability of the information provided. In addition to this, in keeping with the dialectic nature of conceptual discourses and truth, my opinions and perspectives may change and evolve over time.